The Installation of the New Rose Croix Inspector General

It seems only yesterday that we were all gathered together in the Langstone Cliff Hotel to welcome in the new Inspector General of Devon Rose Croix and proclaim him the “Very Illustrious Bro. Michael T. Penny.33°".

The ceremony took place at an emergency meeting hosted by Coryton and Rougemont Union Chapter Rose Croix No. 2. Taking charge of the meeting was V P Bro David Williamson Lieutenant Grand Commander, 33° he was accompanied by other Members and Past Members of The Supreme Council. 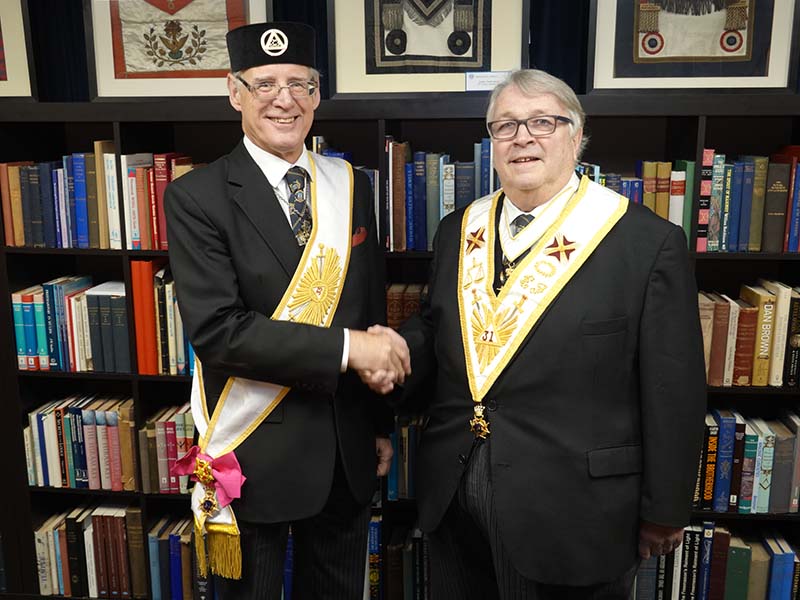 The ceremony was witnessed by over 150 brethren of the order representing every Chapter in the Province: they rose as one to greet the procession as it entered the room, Michael was supported by the Provincial Grand Master RW Bro Ian Kingsbury, along with the Craft Chapter and Mark Executives, and the District Recorder Ill Bro Alan Gill 30° and Past District Recorders Ill. Bro’s Gerry Rooke and Brian Eastwood 32°.

The practice of the Rose Croix degree is first recorded in England in about 1770. The Knights Templar degrees started in England at about the same time and Rose Croix took its place as the final degree of the English Knights Templar Encampments. The Supreme Council 33rd Degree for England and Wales and its districts and Chapters Overseas was founded in 1845. The ceremony seeks the Perfection of Christian Virtues of Faith, Hope and Charity and is open to all freemasons who have a belief in the Trinitarian Christian Faith.

The Rite consists of 33 degrees, of which (in most jurisdictions) the three degrees of Craft Freemasonry are accepted in lieu of the first three degrees of the Rite. Of the remaining 30 Degrees, different jurisdictions work different degrees, but in England and Wales just five are worked: the 18°, 30°, 31°, 32° and 33°. The only one worked in chapters is the 18°, known by the grand title of Sovereign Prince of the Rose Croix of Heredom. It is from this that the Order gets its nickname in England and Wales: Rose Croix.

Here in Devonshire, there has always been a close affiliation between the orders of Freemasonry as was witnessed at this Installation meeting where so many heads of order were present and of course there will always be a special relationship between Rose Croix and Craft Masonry as Michael was their PGM between 2007 and 2012 before handing over the reins to Ian Kingsbury.

The address given by V. Ill. Bro. Michael in the ceremony really sums up what this day meant to him. He had a general message of encouragement and positivity starting with his inheriting a very happy and flourishing District from his friend and Predecessor V Ill Bro Michael French 33°.

He also commented that our District has survived lockdown and come out all the stronger and how each and every Chapter without fail made their own particular arrangements to suit its own membership, to keep in touch, support and care for all its members and families.

The next positive message was the very special relationship with the Craft, Royal Arch, Mark Masonry and other Orders.

Michael reminded us of the important lessons learned during the Suspension, and the importance of engagement with EVERY member of the Chapter and not just those who turn up for every meeting but continue to engage with those who do still do not feel comfortable attending.

Michael was very pleased to give a very encouraging message concerning membership numbers and reported that at nearly every meeting that he attended there has been a ballot either for a new or re-joining member or even both - Great news!

He also emphasised the importance of cherishing every candidate and making his ceremony and pathway an experience both personal and memorable. It’s equally important that we continue to look out for our future membership carefully, actively, and with enthusiasm.

Michael concluded by sharing the additional emotional poignancy for him in having the honour of wearing the same Devonshire silver chain worn by his dear Father Douglas who was the first IG for Devonshire after it was separated from the joint District of Devon and Cornwall. He was an inspiration for Michael, his Brother V Ill. Bro Patrick Penny 33° , and many others with his pure love of the A&A Rite.

Finally, Michael thanked Very Puissant Bro Lt Grand Commander and his colleagues from The Supreme Council for the honour conferred that day and for the delightful ceremony. He pledged to all the brethren of the District of Devonshire that he would do his utmost to justify that confidence.

Any Brother who may be interested in learning more about the Rose Croix please contact our District Recorder Ill Bro Alan Gill tel; 01626 369928 email This email address is being protected from spambots. You need JavaScript enabled to view it..