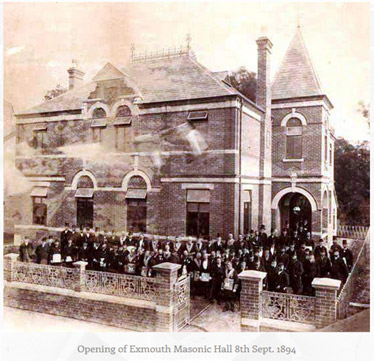 There are not too many organisations that have existed for 125 years in the same building but, on Monday 9th September 2019, that is exactly what the Freemasons of Exmouth celebrated – the 125th Anniversary of the opening of Exmouth Masonic Hall.

A total of 80 Exmouth Freemasons and guests celebrated with a special 4 course dinner to commemorate their forefathers foresight, exactly 125 years and 1 day ago.

The celebration marks that on 8th September 1894 (a Saturday), the Exmouth Masonic Hall, was first officially opened. Previous to this The Sun Lodge No. 106 first met in Exmouth in 1784 (235 years ago), at various establishments in the town, until settling in our current home.

Exmouth Masonic Hall is in St. Andrews Road, and was originally built in 1894, in the then named Ferry Road. Which was subsequently renamed after the nearby Church of St Andrew (now a Grade II Listed Building) was built in 1896.

On the Monday evening at the regular monthly meeting of The Sun Lodge No. 106, an informative and entertaining talk on the 125 year history of the Masonic Hall, was delivered by W. Bro. D Greenaway PPrJGW. The history highlighted the building's origination from; obtaining the land, laying of the foundation stone, design along with high specification of all modern conveniences such as hot water pipes gas lights, and fireplaces, costs of approx. £2000, opening & dedication , it's use, later expansion, continued development, and future planned improvements.

The Freemasons of Exmouth might well have one foot in the past, but definably have the other foot firmly established in the future. The Masonic Hall enables past, present and future Freemasons to both meet and dine together and we look ahead in making the Hall fit for another 125 years.

An original news item which eloquently describes the opening of the Hall, written by the Devon and Exeter Gazette, which was also republished in The Freemasons Chronicle on 15th Sept 1894, is shown below.

A COMMODIOUS and well-appointed Club, with a handsome Masonic Hall , for the use of the members of Sun Lodge, No. 106, has been erected in Ferry Road, Exmouth, and was opened and dedicated on Saturday. The Freemasons of Exmouth have hitherto held their Lodge meetings at the Beacon Hotel, but finding the accommodation not sufficient for their requirements, it was determined to form a Limited Liability Company and erect a Club and a Masonic Hall combined. The shares were readily taken up, and the foundation-stone of the Club was laid six months ago.

Since then the work has been pushed forward, and all concerned are to be congratulated upon the completion of a very comfortable and well-arranged Club, which will meet a long felt want in Exmouth, and enable the members of the Craft to more easily carry on their business. Mr. S. P. Firth was in attendance at the Club on Saturday, and very courteously showed visitors over the new premises.

The building is composed of red brick, and Bath and limestone dressings. It is entered by a covered porch, which leads to a vestibule, and then into a hall 24 feet by 10 feet. On the ground floor is the smoking-room, billiard-room, bar, lavatories, cloak-rooms, Secretary's room, and caretaker's apartments. The smoking-room is 27 ft. by 20 ft., and is furnished with mahogany card tables, settee, and comfortable chairs. The ceiling is divided into three panels, with cornices and centre flowers, and the windows are adorned with dark red plushette curtains. Next to this is the billiard room, which contains a very handsome mahogany table. At one end of the room is the bar, 16 ft. by 12 ft., fitted with walnut top counter, and doors and screen glazed with coloured leaded lights. Above these rooms are the reading-room, the Masonic Hall, and a couple of ante-rooms. The reading-room is 24 ft. by 16 ft., with a bay window overlooking the Manor House Grounds.

The ceiling is a half open timbered one, and divided into panels by wood mouldings. The room is comfortably furnished and supplied with paper and writing materials.

The Lodge Room is 40 ft. long, 27 ft. wide, and 16 ft. high, with an open timbered roof . A raised dais is fixed at the east end. The Hall is heated with hot-water pipes. The walls in all the rooms are coloured in two harmonious tints, and the floors covered with suitable linoleum. There is a store-room over one of the anterooms, which leads to a lead flat, surrounded by ornamental iron railings, and from this position a capital view can be obtained. The whole of the Club is lighted by incandescent gas lights; and, in addition to hot-water pipes, each room is provided with handsome mantelpieces, with tiled grates and hearths.

The building has been designed by Messrs. Kerley and Ellis, Architects, of Exmouth, the contractor being Mr. A. Hayman, of the same town, the cost of the entire work is about £2, 000.