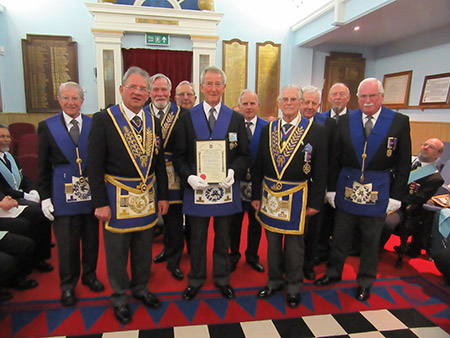 On Wednesday 1st May 2019 there was a large attendance in Sidmouth for what was a very short meeting agenda. After the opening business had been completed and the Fraternal visitors from Sun Lodge welcomed into the Temple the next item was to read the ancient minutes. Normally this would be an extract from meetings held 200 and 100 years previously, however, on this occasion, it was purely the full minutes from 50 years ago. The main business of that evening had been the Initiation of a Lewis by his father. A Mr John Edward Peter Eaton.

With that completed the next item on the agenda was to present a 50 Year Service to Freemasonry Certificate to W Bro John Eaton PAGDC. V W Bro Chris Pengelly and W Bro Jeff Attwod came forward to lead this, the main business of the evening. After some introductory comments they called W Bro John forward to stand between them as they recounted details of his personal life and his masonic career. Many names mentioned brought murmurs of recognition from around the temple while there were several moments of high emotion bringing the presentations to brief halts.

W Bro John had been Initiated by his father, W Bro Les Eaton on 7th May 1969, at the comparatively young age of 22. He was passed to the Second Degree the following month. On the 5th November he was raised to the third degree, how loud an explosion was that you might ask. He was appointed a Steward of the Lodge in October 1974 and progressed up the “ladder” to become Worshipful Master in 1983. In 1992 W Bro John received his first Provincial Appointment as the Provincial Grand Registrar and was promoted to the rank of PAGDC in 1999. 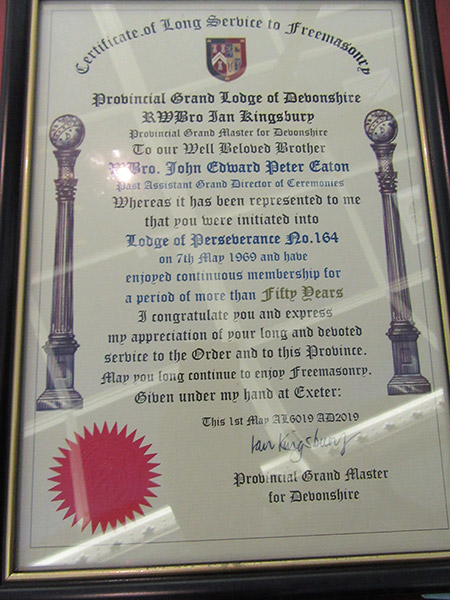 In other degrees W Bro John was Exalted into Perseverance Chapter on 19th September 1985 and was Installed as 1st Principal February 2007. He was appointed PPrGSwdB at the Provincial Chapter meeting November 2011. He was Perfected In the Rose Croix October 1993 and was Installed as Most Wise Sovereign in April 2005. 2015 saw Ill. Bro. John promoted to the 30th degree. At one time John was a member of the Mark Degree and reached the very high rank of Deputy Provincial Grand Master.

During these explanations W Bro John added a number of interjections and on several occasions remarked how the coterie of friends and Brothers he had built up over the years had helped him through both the highs and lows of his Masonic career. He was then formally presented with the certificate from Province. W Bro Attwood also presented him with a personal gift to remember the evening. The gaggle of Grand Officers attending, who were all personal friends, gathered around to express congratulations.

His attempt to return to his seat was thwarted as he was brought back to the centre to receive yet another presentation. This time W Bro Martin Kerridge (who had known John for 44 years) and W Bro Simon Gray gave him a handmade box which could be used as a desk pen box or for other storage in recognition of their long association and John’s service to 164.

The Brethren all resumed their seats and the Lodge’s closing business was completed before everyone retired back downstairs. After the meal a Toast was taken to W Bro John and he took the opportunity to respond. He surprised the assembled company by producing a couple of his earliest summons from initial visits. The first had been to Sun Lodge! Yet again there were murmurs of recognition as names were read out from almost 50 years ago. W Bro John also expressed his gratitude to those close friends who had stood by him through thick and thin over the last 50 years and were with him again at table that evening. In closing he added that there was one person, who was not able to be with them at this time and to whom he was eternally grateful, his wife Roz. This had certainly been a remarkable evening at Perseverance Lodge No 164 with many trips down memory lane.