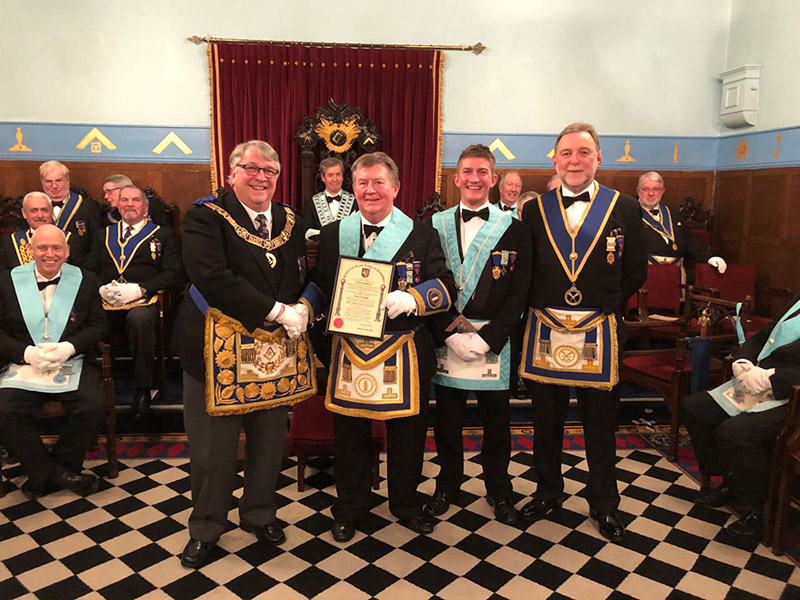 The following citation was read to the lodge.

You have a 100% attendance record in Lopes Lodge since being Initiated in 1984, and your services to the lodge have been recognised by your continued advancement through the Craft.

You were appointed Past Provincial Junior Grand Deacon in 2001, Past Provincial Grand Supt of Works in 2009 and Past Provincial Junior Grand Warden in 2016. As Director of Ceremonies you have worked tirelessly to raise the standard of the Ritual in Lopes Lodge through formal rehearsal evenings here and at unofficial rehearsals with Brethren in your home. The result of this endeavour is the high reputation of Lopes Lodge for short but sincere and meaningful ceremonies. None better appreciated than at the Installation ceremony this evening.

You were Master of Lopes Lodge in 1992 & 2011 and whilst initiating your son in February 2011 you completed the entire ceremony yourself. You are also the Assistant Secretary of the Lodge of Union No 444 at Starcross and a member of Old Exonian Lodge No 9000 at Exeter School, regularly undertaking ritual in all of these Lodges.

The special services that this award recognises include those you undertake away from the lodge room and not in the spotlight. Your accomplishments in this respect are legion. Whilst your profession has been that of a Veterinary surgeon, you have incredible talent as an expert craftsman in carpentry, metalwork and engineering. You have used all of these skills to benefit Freemasons in Devon and Exeter and for decades have constructed, renovated and repaired all manner of masonic furniture including gavels, columns, Tracing Boards, chairs, and pedestals. You have engraved many plaques and made display cabinets. You constructed the fine large metal Lopes vault here in Gandy Street and refurbished most of the artefacts in Gandy Street lodge room and in the museum downstairs. You have used your carpentry and marquetry skills to make superbly executed wooden chests for firing glasses of both Lopes Lodge and Exeter School Lodge. You have manufactured plumb rules and levels for the Lodge of Union and for Courtland Lodge at Paignton, Gavels for Estuary Lodge in Kinsgbridge and most recently you constructed a large cabinet at Topsham for Brent Lodge. You constructed the exquisite and decorative carrying case for the Provincial Tercentenary Banner as well as the display case in which it currently rests in the vestibule of Freemasons Hall. There is insufficient time to list all the work you have done to help other Lodges and, unknown to many here tonight, you frequently assist your neighbours and infirm friends with your maintenance and repair skills, thus exhibiting by practice, the attributes of a Freemason in the community. In addition you have assisted at Provincial events over many years including at Ugbrooke House and in Exeter.

All in all, your contribution to this lodge, this Masonic Hall, to Freemasonry in Exeter and in the Province in general, is invaluable, inspirational and one that is much admired and appreciated by your Brethren and others. It is exactly for this dedication and commitment that the Provincial Grand Master has decided to award you his Certificate of Service to Freemasonry.