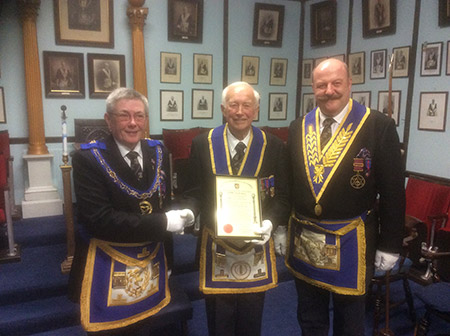 He was assisted by W.Bro Richard Ebrey PrGSec who gave details of W.Bro Venner’s personal life growing up as a keen footballer playing for Holsworthy Magpies. He left school at the age of 14 yrs and started work as a Butcher’s boy working for a local butcher but joining the Royal Airforce as a cook at the age of 18 years doing his National Service. On completing his National Service he resumed working as a butcher. He was a very successful butcher and received many accolades and prizes. He was Master Butcher of the Year three times appeared on Television on Good Morning Television and magazines Good Housekeeping, Women’s Own, and Women’s Realm in the 1980’s.

He has been married for 63 years to his wife Elizabeth. He is a proud father of Jenny and Gary and has 5 grandchildren and 5 great grandchildren. He is proud of all of them and their achievements. Colin came to live in Bodmin Street, Holsworthy in September 1958 and during October the same year he was initiated into Concilation Lodge 3483. He was proposed by the late Jack Sargent and seconded by the late Herbert Stanlake. He became Master in 1971. He has been a staunch member of the Lodge and has undertook many duties in his 60 years including Almoner from 1997 to 2007. His family remember him learning from his little blue book and received recognition from the various Provincial Grand Masters who promoted him to PPrSGD, PPrGReg 1989, PPrJGW 1998.

Colin retired in 1993 having had a quadruple heart bypass. Colin and Elizabeth carried on through their retirement doing Bed and Breakfast until his 80th birthday. He is a very keen gardener and enjoys sports on TV.

W.Bro Yelland APGM showed several photographs to the brethren of Colin dressed in his butcher’s apron in front of award winning displays of meat and presented to him, from members of Conciliation Lodge a bottle of refreshment and some Gardening Vouchers saying “ We wish you many more years of happiness and congratulate you.” The Lodge was well attended the brethren responded with loud applause.

W.Bro Colin responded in his gracious manner by saying,

“It was all a great honour,”

and thanked the Lodge for the presentation.