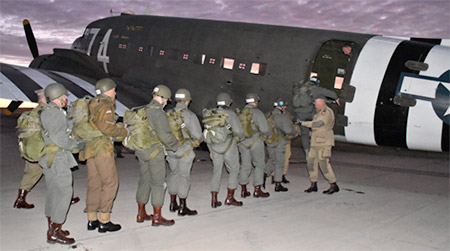 A 25-year long wait finally ended last month for a member of Duncombe Lodge No.1486 in Kingsbridge, Devon with a trip to The WWII Airborne Demonstration Team (ADT) Parachute Jump School based at Frederick, Oklahoma, deep in the American Mid-West. Brother Lee A. Newins, a former member of The 10th Battalion, The Parachute Regiment, realised his dream of being ‘Number 1 in the Door’ and parachuting out of a twin-engine Douglas C-47 Skytrain (known also as a Dakota) that originally took part in the 1944 Operation ‘Market Garden’ at Arnhem in Holland. When serving with the Army, Lee had always wanted to jump out of a C-47, but when these ‘esteemed ladies’ were bought out of retirement for the big commemorative events such as Normandy and Arnhem, the lower ranks were invariably back- squadded to parachute from the RAF’s C-130 Hercules. “So about a year ago”, Lee recalled to the local Frederick Newspaper Press Leader, who approached him because his uniform differed from all of the others attending the School; “I looked this up on the internet and couldn’t believe what I found.” Recounting his past military service life Lee observed,

“As a former serving infantry Paratrooper, I was originally allocated 2-jumps here at the School, but managed 4, all static-line and from 1500-feet. Whilst being under canopy again was a fantastic experience, the real icing on the cake was always going to be meeting and listening to the Veterans who were actually there at the time of conflict. Over the years how lucky I have always considered myself to be in a position to hear of their experiences first-hand.” 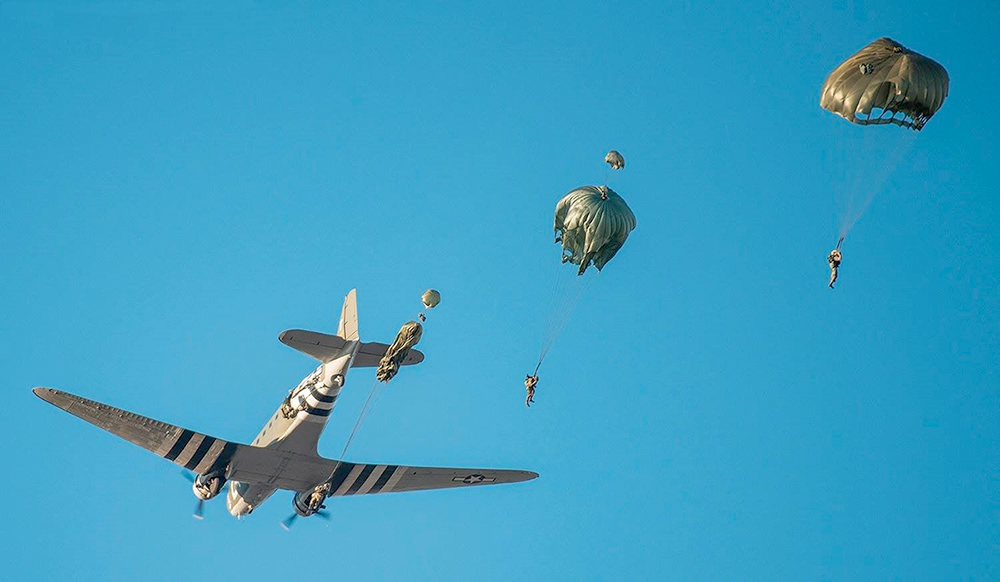 After a week-and-a-half’s vigorous ground training and jump operations, the Fall Jump School culminated in a ‘pinning ceremony’ where the qualifying students, of which Lee was one, were presented with their ‘wings’ by one of the Veterans in attendance. In Lee’s case, fate lent a hand as he proudly received his award personally from 95-year old Norwood W. Thomas, a former trooper with the 101st US Airborne Division who parachuted into Normandy on ‘D-Day’ and again later near Nijmegen in Holland (for Operation ‘Market Garden’), together with serving under fire at Bastogne (during the ‘Battle of the Bulge’) and finally entering the Eagles Nest (Hitler’s mountain retreat high above Berchtesgaden) at the end of the War in the European Theatre.

Lee had previously spent many hours in the company of this venerable gentleman, one of the original ‘Band of Brothers’, hanging on to every word of his captivating stories, recounted with such clarity one would be forgiven for thinking that they had occurred only the day before.

A fellow Student, whom Lee befriended at the School, ironically turned out to be another Freemason, The Very Worshipful Brother Chris Grabowski, a past District Deputy of the Grandmaster, a member of Harmony Lodge No. 18,
located in Olympia, Washington State. Somewhat poignantly, it also transpired that they were both born on exactly the same day, with Chris being some 4-hours older than Lee. Clearly, a fraternal visit could very much be on the cards in the not too distant future! 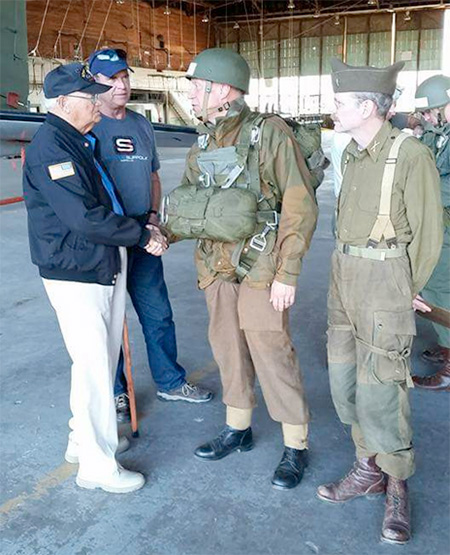 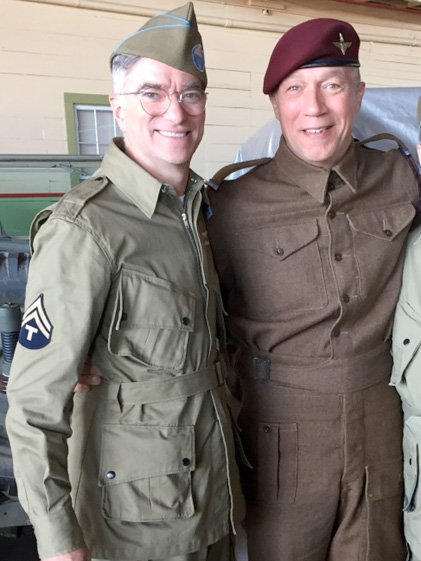 As a footnote, the WWII Airborne Demonstration Team Foundation operates two aircraft from a former US Army Airforce Base; the C-47 ‘Boogie Baby’ and a C-49 christened ‘Wild Kat’. It was formed to ‘Remember, Honour, Serve’ the memory of those men and women who fought and died to preserve America's freedom not only during WWII but during all conflicts. By his attendance in Frederick, Lee felt respectfully privileged to be able represent both his former Battalion, and by being attired in an authentic 1944 WWII period uniform, those British military personnel who served and fell alongside their US Airborne allies. Having enjoyed a real ‘1940’s time-travel’ experience, coupled with excellent training, instructors and equipment, including of course, the historic aircraft, and whilst setting the foundations for new life-long friendships, this may not be the end of Lee’s parachuting association with WWIIADT, merely only the beginning……….