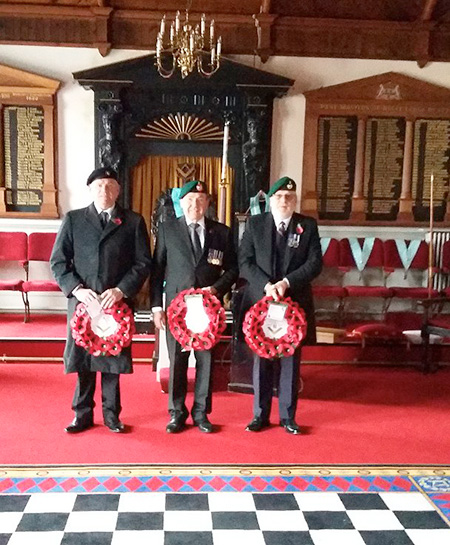 The Royal Marines and the Royal Navy were already well established when Freemasonry was born, and over the past three centuries have provided fellowship and a watering hole for countless sailors and marines all around the Globe.

All three of the Lodges in Exmouth are blessed with former Royal Marines as members, with the majority of those being Members of Per Mare Per Terram Lodge. Within Per Mare Per Terram there are several Members still serving in the Royal Marines, and indeed our next ceremony in December will see a further addition as the candidate is a serving Warrant Officer.

With the three Exmouth Lodges all having former Royal Marines as members, it creates a bond between these Lodges and goes some to explaining why an evening spent at any of the three is such a pleasant experience as the banter can only be described as witty and constant if totally harmless.

At the Remembrance Day parade on Sunday 12th November the three Freemason’s Lodges in Exmouth were represented by their Worshipful Masters for the wreath laying ceremony.

The wreath donated by Sun Lodge No.106 was laid by W. Bro Simon Skinner formerly a Leading Seaman in the Royal Navy.

The wreath for the Rolle Lodge No.2759 was laid by W. Bro Peter O’Connor, formerly a Warrant Officer 2 (Helicopter Pilot) Royal Marines.

And the wreath for the Per Mare Per Terram Lodge No.9355 was laid by W. Bro Tom Devin, formerly a Warrant Officer 2 (Platoon Weapons Instructor) Royal Marines.

W. Bro Chris Brookbank
Per Mare Per Terram Lodge No.9355