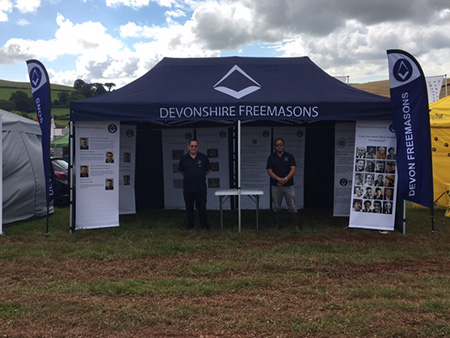 The Membership Team spent the day at the Totnes show, which was truly a day of two halves.

The morning was interesting with vehicles sliding everywhere and one nearly parked in the tent next to us. Largely due to the weather, the morning had a steady start, but as the sun came out at lunch time so did the crowds.

Today's team, W.Bro Goode and Bro's Chundee, Niles and Lewis, had a busy afternoon leading to a successful day. We were also joined By W.Bro Colin Gale, who supported us through the worst of the weather, both with encouraging comments and more importantly warm coffee. Thank you Colin.

We spoke to 320 people, with a further 200 people standing off and reading the information contained on the new branded banners. Nearly 400 stickers were given out to children and we were approached by a mother with 2 boys who thanked all of our Brethren for the teddies her boys had received whilst in hospital.

We were also approached by a Mason visiting from Brazil who enjoyed telling them about his lodge and hearing about Masonry in the UK.

On the plus side the team were approached by 2 Brethren who were considering migrating to Devon and 2 returning Brethren who had been away from the craft for over 20 years each.

Furthermore the team were approached by a local lodge, who after seeing how the team worked and understanding their recruiting process has now asked us to work with them and accept candidates.

The team now look forward to honing their skills even further at the Honiton Show on 03 August 2017.