At the meeting the Minutes of 100 years were read, then W.Bro. Peter Keaty PSGD, APGM read the minutes of 50 years ago. Pointing out to the Brethren that the meeting to which then Colin Gale was to join Freemasonry was the 4th Friday in December but as this was Xmas Eve the meeting was differed by dispensation to the 3rd January 1966. The Provincial Grand Master then was RW. Bro. Cyril Henry Crews. The meeting was then held at the Davey Masonic Hall, the WM was W.Bro. R.G. Buxton. It was also noted in the minutes that W.Bro L.S.T. Gale, father of Colin, did the Address and gave the Charge at this his son’s Initiation. He declined to take the Chair as that was the Master’s Job!
The Provincial Grand Master before presenting the Certificate asked W.Bro. Richard Ebrey, The Provincial Grand Secretary to read a citation of W.Bro. Gales life. A few of the points in respect to W.Bro. Gales Masonic journey were as follows: He was Passed on 25th February 1966 and Raised on the 27th May 1966. Because many members were in the services at that time, progression was quick and he was installed as Master in October 1973. His Father this time took no part in the ceremony, again he considered quite strongly that it was the retiring Master’s duty to install his successor. Later in 1976 he took over from his father as secretary of Dundas and continued until 1986 when pressure of work forced him to stand down. He became a Provincial Steward in1982, Past Provincial Senior Grand Deacon in 1984 and Past Provincial Junior Grand Warden in 1991, in 1998 as there was a bit of a crisis in the lodge he came back as secretary until 2004 and again stood down due to health. In late 2004 RW. Bro. Robin Osborn PGM asked him if he was coming back to continue his work in the Provincial Office. Colin had been working with W.Bro. Colin Davies on the new members’ database which had been developed. Seeing this as a challenge to get fit again he restarted work on the database and then the PGM appointed him as Provincial Assistant Grand Registrar. 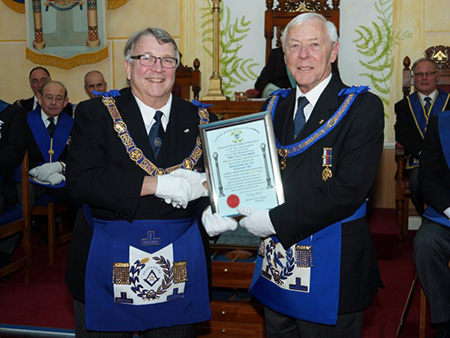 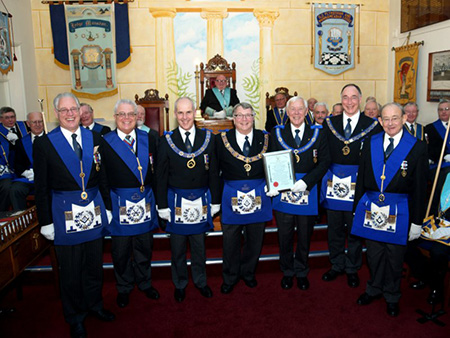 In 1955 Colin went to Plymouth College, other notable people who were there at the time in the same year were W.Bro. Bill Daw and W.Bro. Geoffrey Isaacs, former PGM of the Mark in Cornwall and in the year above was W.Bro. Tony Banbury our Provincial Mentor. With Plymouth College as part of his past, he then, with a little arm twisting, joined the Old Plymothian and Mannameadian Lodge No. 6279 in 2009 and has since then taken an active part in the workings of the lodge.

When RW. Bro Michael Penny became PGM he gave W.Bro. Gale a number of projects to do, including merging the different charities in the Province into the Benevolent Fund, thereby doing himself out of the job as Honorary Secretary of the Aged Widows and Fortescue Fund which post he had occupied since W.Bro. Maurice Eglinton had become an Asst PGM in 2007. Other projects included arranging the Festival Dinner at The Torquay Riviera Centre in 2012. He was appointed as Past Grand Standard Bearer in 2009 and became Assistant Provincial Grand Master in 2011.

He was Exalted into Dundas Chapter 22nd April 1975 and became Z in 1986. His Principal Sojourner was at that time a certain Simon Rowe now MEGS. He was appointed Provincial Standard Bearer in 1990 and Past Provincial Grand Sword Bearer in 1999, he joined Devonian Chapter of First Principals in 2003 and was appointed Past Provincial Grand Scribe N in 2004. He Joined Pilgrim Rose Croix in 2003, The Royal Order of Scotland South West Counties in 2013 and has served under 8 PGMs and 6 Grand Superintendents since joining Freemasonry.

On presenting the 50 year Certificate the PGM thanked The Provincial Grand Secretary for the citation and commented that in the month of November 2011 when W.Bro. Colin Gale received APGM and he at the same time was invested as DepPGM remembering that day well, taking the salient points of the citation he especially thanked W.Bro. Gale on behalf of RW.Bro. Robin Osborn for his work done on amalgamating the charities and for all the assistance he had given him since, as well as all the work done for the Province, He said ‘you have given great service to our Province and your work done has been exemplary in all the tasks you have taken on overseeing the Mentoring, IT systems, the MFST fishing scheme and the establishment of the Armada Group which is growing in strength by the day in this Province, you have also agreed to oversee Recruitment in the new year, a very busy and capable APGM’

The PGM then read a poem written by W.Bro. Christopher Yard as he was attending another meeting and had given an apology along with W.Bro. G. Rodgers who was on holiday. On replying W.Bro. Gale thanked all those who had turned up to support him and made special note of W.Bro Clifford Heard PPrJGW and W.Bro. Norman Tozer PPrJGW who both as members of The Lord Roborough Lodge were Masters at the same time as Colin in 1973/4, as well as many others who had made friendships over the years. Photos were then taken of the Certificate presentation, a photo with W.Bro. Heard and Tozer and W.Bro. Colin Gale with 3 Provincial Grand Masters of our Province. Under the direction of W.Bro W.S. Daw acting as Provincial DC the Province then retired. The celebrations continued at the festive Board, The Dundas Lodge presented him with a Glass and a bottle of Plymouth Gin. A wonderful evening was had by all and another landmark in W.Bro. Colin Gale’s Masonic journey.