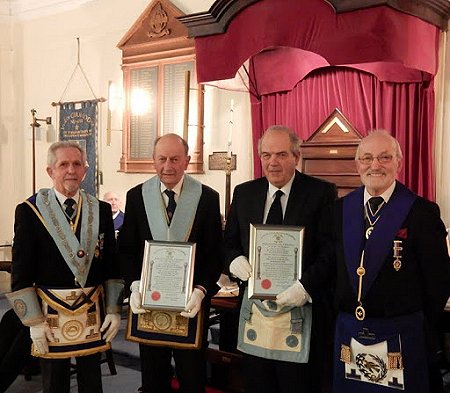 W Bro. Robert John Garrett was proposed into Freemasonry by his late father W Bro. Herbert Garrett and seconded by the late W Bro. Freddie Earland. He was initiated into the Vale of Culm Lodge No. 4781 on 7th February 1966. Passed on 2nd May 1966 and Raised on 7th November 1966. W Bro. Robert became Worshipful Master on 1st March 1976, a position he went on to occupy for two years due to Bro. James Corkery having to decide not to proceed to the chair of the Lodge.

Bro. Corkery’s significant business commitments over the years has required him to work away in the Middle East for much of his time in Freemasonry. Nevertheless, his achievement in maintaining his contribution to the Order where his circumstances have allowed, demands much respect and appreciation.

W Bro. Robert again went into the chair of that Lodge on 4th March 2002 to allow for the more gradual progression of Junior brethren. His talents were acknowledged by the Province and in April 1985 he was appointed Provincial Senior Grand Deacon. Later in April 1994 he was promoted to Past Provincial Junior Grand Warden.

During his time within the lodge he has served virtually every office from Secretary, Director of Ceremonies through to Lodge Mentor with distinction.

During his many conversations with the late W Bro. Terrence Corkery he expressed his desire for a new Lodge based on the farming industry. W Bro. Robert, encouraged by the response from the Province’s desire to ensure there was sufficient support for a new lodge, formed a small group which included the late WBro. Frank Rowe John Spence and WBro. Bill Carnell. Soon 35 brethren came forward as Founder Members, the end result of which was the consecration of the Devon Farmers Lodge No. 9250 at the Rougemont Hotel Exeter on 13th February 1988. This Lodge has continued to flourish and currently boasts a membership of 65.

W Bro. Robert was the Founding Senior Warden in 1988 and was installed as WM in September 1988. He subsequently was unanimously elected to serve as its Master again in 2012, and during this period of Office the Devon Farmers Lodge celebrated its 25th Anniversary. Within this Lodge WBro. Robert has also occupied the offices of Mentor and Assistant Director of Ceremonies.

The late W Bro. Ronald Discombe during a conversation with Robert remarked that the Masonic Hall at Uffculme would make an ideal venue for a Chapter. This set WBro. Robert thinking and with the support of RWBro. Stanley Hopkins, W Bros. Bill Carnell, Chris Summers and the late WBro. Michael Hitt and Len Evis, set about the creation of a new cross border Chapter. Indeed when approaches were initially made to the then Grand Superintendent E.Comp Roy Webber, WBro. Robert was not even a member of the Order. Realising this, Ex Comp Roy Webber proposed Robert into the St Peter Chapter No. 1125 and he was exalted in May 1987.

The Devon & Somerset Farmers Chapter No. 9250 was consecrated on 30th September 1999 with 24 Founder Members. This again has proved another wonderful success story and the Chapter currently boasts a membership of 60. Robert became the Chapters First Principal in 2007. Again his talents were recognised by the Province and he currently holds the rank of Past Provincial Grand Sojourner.

W Bro. Keith Farmer during discussion with WBro. Robert during the autumn of 2011 mentioned that there didn’t appear to be a Lodge in the area based on the construction industry. Not satisfied with already having been central to the formation of one new Craft Lodge and Chapter, WBro. Robert enlisted the support of VWBro. Peter Layzell, WBro. Keith Farmer, Bro. Ian Firth and WBro. Bill Carnell and set about gauging support for another new craft Lodge. This resulted in the consecration of the Lodge of Construction No. 9892 on 5th September 2013 with 31 Founder Members. This new craft Lodge is again proving a success with a current membership of 40. WBro. Robert has already occupied the office of Immediate Past Master of the Lodge.

W Bro. Robert has also been prominent with the running of the Masonic Hall. His predecessors recognised his talents at an early stage and he was appointed a trustee some 35 years ago. With the advent of so many other Lodges and the Chapter utilising the facility he was one of the prime movers in realising that the premises needed to be run by a Management Committee incorporating members from each organisation as opposed to a group of Trustees. Indeed, a Management Committee was formed in 1986 and Robert has occupied the office of Chairman for over 20 years.

Indeed, during his time as a trustee/chairman of the Management Committee the building at Uffculme has undergone a complete overhaul. Phase 1 was the enlargement of the Lodge Room increasing its capacity by some 40%. Phase 2 was the rebuilding of the Kitchen at the Southerly end of the premises. Phase 3 quickly followed with the repositioning of the bar and creation of a dining room which can now cater for 115 brethren.

One of W Bro. Garrett’s keen interests is local history and Masonic artefacts. The Vale of Culm Lodge was bequeathed a large quantity of Masonic memorabilia by the late Dr. Huth who was also a Founder Member of the Vale of Culm. Indeed, Robert has created a most interesting talk on the artefacts and the history behind the various items in the collection which he has kindly given to a number of local Lodges.

Another of W Bro. Roberts’s pastimes is the study of archaeology and he and his wife have spent many an hour digging just under the beacon at Pitt Farm. Indeed, on a number of occasions he has appeared on television with the bits of broken pottery and other finds he has uncovered. Likewise, Robert and family have over the years also created a museum of agricultural implements that have been used down the ages. Indeed, many people within the community and brethren have been given the opportunity to have a guided tour of the museum. He is also frequently contacted by television companies making period dramas to use some of their equipment in their production.

To conclude, they always say behind every good man is a good woman. In Sheila Garrett he has just that and she has supported W Bro. Robert every inch of the way throughout his Masonic career.