Freemasonry for all generations 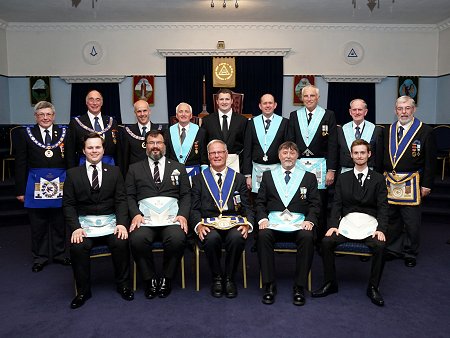 The Initiation meeting of Mr Nick Horton at The Lord Roborough Lodge No. 5789 indeed turned out to be a family affair.

Now Bro. Nick Horton, the son of Bro. Andy Horton a Steward in the Lodge was surprised to see his Grandfather, W.Bro Des Horton who had joined the Lodge the month before to make his surprise to his Grandson, also his Cousin W.Bro. M. Crocker from the Province of Berkshire came down especially to attend Bro. Nick Horton’s Initiation.

To show that Freemasonry is for all generations W.Bro. Peter Brookshaw PPrJGW (SW), his son Brendan Brookshaw (WM) and Grandson, Bro. Henry Brookshaw (Steward) all members of The Old Plymothian and Mannameadian Lodge No. 6279 attended as guests.

From The St Andrew Lodge Were Father and Son, W.Bro. Paul Watson (WM) and Guy Watson (FC). Bro. Guy Watson was Initiated by his father on April 1st 2016 exactly 11 years on from when W.Bro. Paul Watson was Initiated on 1st April 2005. The Worshipful Master, W.Bro. John Pritchard PPrGSwdB of The Lord Roborough Lodge was delighted to have been able to Initiate Bro. Nick Horton into his ‘family’ Lodge.