The meeting of Sir John Hawkins No.3704 on Tuesday 21st June 2016 was indeed a special night for presentations and surprises. Apart from confirming the minutes, receiving propositions and to collect dues, the summons read : To transact any other competent business, the WM may bring before the Lodge. To the delight of the Worshipful Master, brethren and visitors this item on the agenda attracted a larger audience from our Province. After opening the lodge admitted under the direction of W.Bro. Howard Pope, Prov Deputy GDC, RW Bro Ian Kingsbury JP, Provincial Grand Master; VW Bro Nicholas Ball, DeptPGM; 4 Grand Officers; a large escort of active officers and Past Wardens.

The first presentation was introduced by W.Bro John Monk PPrJGW who had made a display cabinet to house the regalia of W.Bro Austin White a member of Sir John Hawkins Lodge many years ago. W.Bro Austin White was initiated into the lodge in 1976, became WM in 1987 and was appointed, Provincial Junior Grand Warden, by Right Worshipful, The Provincial Grand Master Edward Holman in 1996, ‘an office he carried with great care and attention’. The following year he was appointed Past Senior Grand Warden, sadly, Austin became very ill and passed away in 1998 aged 62. Just recently, his son W.Bro. Gavin White, from St Stephens Lodge No.9147 meeting at Saltash made a decision to give his father’s regalia to Sir John Hawkins Lodge, his mother-lodge. On this special occasion W.Br. Stephen White, Austins Nephew was pleased to be asked to unveil the cabinet and contents. W.Bro. Monk thanked Bro. David Stone for his help in mounting it on the wall of manadon masonic temple. 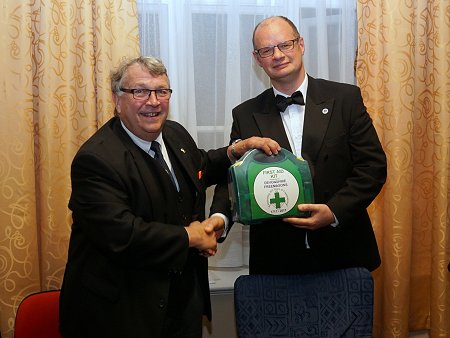 Continuing the presentations W.Bro Monk PPrJGW introduced to the visitors the Sir John Hawkins ‘Loving Cup’ which holds the names of all the past masters of the lodge but has now become full. W.Bro. Monk recently took it on himself to add another method of creating more room for future past masters and thought of a lid, he commissioned this to be done and had made a solid silver dome lid, which would hold the names for another 105 years. W.Bro Monk also made a custom box to hold the cup and gifted all of this to the lodge, helped by a contribution from a one-time member, W.Bro. Ivan Goddard who many I am sure will remember.

The next presentation was to W.Bro Keith Bower PPrSGW, who has taken on the ‘Teddies for loving care’ scheme from the late W.Bro. John Adcock PAGPurs. W.Bro.David Whitfield of Sir John Hawkins Lodge No 3704 holds outside of Freemasonry many functions and dinners in memory of his grandson Ethan, of which the proceeds go to Children’s Hospice South West and the Devonshire Freemasons Charity, Teddies for Loving Care. Ethan's Memorial Dinner this year raised £9566.40 of which £1500.00 is for TLC and the remainder will be going to Children’s Hospice South West. On presenting this cheque he was again delighted to be able to continue to assist the Teddies for loving care scheme.

Two Grand Lodge certificates were then presented to Bro. Loye and Bro. Spinner by W.Bro. Peter Durrant MBE PPrSGW a member of Sir John Hawkins Lodge. Much to the surprise of the Provincial Grand Master a cheque was then presented to him by the Worshipful Master W.Bro Robert Gammage for £500.00 to the Benevolent Fund to which the Provincial Grand Master thanked the Charity Steward and lodge.

Continuing the theme at the festive board the Provincial Grand Master presented to W.Bro Jason Kennedy the Immediate Past Master of Sir John Hawkins a First Aid Kit from our Province, celebrating 300 years of Masonry. This will be going to the 1st Plympton Guide Group.

At the festive board the Provincial Grand Master thanked W.Bro Keith Bower for taking on the ‘Teddies for loving scheme’ and thanked W.Bro David for the wonderful cheque presented to Keith for £1500 as well as all the fantastic work in raising money for Little Bridge House , Children’s Hospice South West. He then thanked W.Bro John Monk for his gifts and presentations to the Lodge, W.Bro Peter Durrant for all he does as charity steward in Sir John Hawkins, the cheque for £500 from the lodge, and his work done in the Province assisting the Provincial Almoner. He also congratulated W.Bro Nick Ruston (sec) on his appointment and support around the Province in his role as ProvSGD. He thanked the WM and all the members for the hospitality shown to both him, his deputy and Provincial Officers who had come to support the evening.