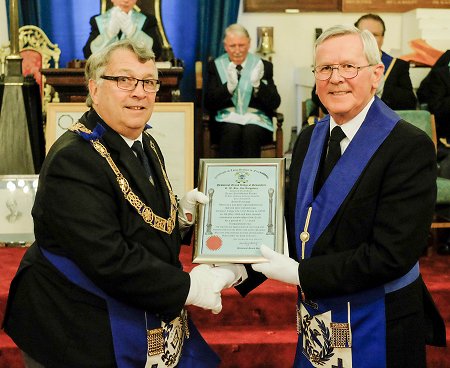 Initiated in Neptune Lodge No.5150 on 5 May 1966, 3 weeks before 22nd birthday. Founder of Links Lodge No.8431 in September 1972. One of only a few founders who remain members. Through the years a member of Pelican 7878, North Devon Masters 9316. An honorary member of far too many lodges to list.

For many years Peter was a frequent visitor of Brunswick as a guest of W. Bro. George Hatherley and became a close friend to all. "Always willing to help, assist and the first to congratulate with the uncanny ability to remember everybody’s name." Peter eventually joined Brunswick Lodge No. 159 on the 3rd July 2013 proposed by W. Bro. George Hatherley and seconded by W. Bro. Steve Pickersgill.

You were honoured with a Provincial rank of PPrGPurs from Hampshire and IoW, followed by PProvGReg (Devon) 1991, before being made an Asst PGM (Devon) 1992-2000. The MW Grand Master then honoured you with an appointment to PJGD 1993, followed by a promotion to PSGD 1995. WBro Peter became President of the Devon Masonic Golfing Association in 1997, following in the footsteps of such brethren as RWBro Bill Kneel and WBro Douglas Penny, becoming one of its greatest supporters and ambassadors. Each year some £500-600 is raised for charity and in 2014 the Association celebrated 50 years by presenting £1000 to the Baton Charity and making PGM honorary member.

Although not a golfer myself, I am reliably informed that your golfing career peaked when you achieved a hole in one at the Autumn 2015 meeting at Stover. Your lodge secretary says that he believes you didn't foot the bill for drinks as is customary, but he did concede that the winnings were passed over to the Charity Steward.

In all Peter is popular has tremendous recall for people’s names. Extremely generous especially with his encouragement and the wine and is a much respected Member of this Brunswick Lodge.