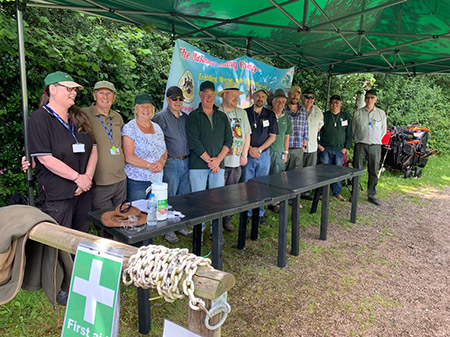 After the awful weather throughout early June, we were fortunate to arrive at Town Parks fishery on a gloriously sunny day for our first outing of this season.As ever, all the kit was checked and everyone reminded of the Health and Safety rules and the usual briefings were given. One main change for this new season was that the First Aider was dressed in a very fetching bright pink hi viz vest. I hope fish are colour blind!

Unfortunately, Jerry the fishery owner had been taken ill which could have caused a problem, but Phill Niles stepped into the breach and bought all his cooking gear with him. Bacon rolls and coffee were provided very quickly and were ready for the children to arrive.

On arrival the children were smothered in sun block by their carers, given their bag of goodies and fishing commenced. The water was very coloured, not surprising after the recent weather, but the fish started to come in, nothing big, but each one caught put a big smile on a child’s face. A regular supply of water was provided, very important in this weather, and the casters were given regular infusions of tea and coffee.

Lunchtime soon arrived and burgers, hot dogs, crisps and fruit were wolfed down. The casters and helpers were issued with a large hot pastie, as we don’t eat anything unhealthy like burgers! The children were on a tight schedule and had to depart at 1400 as most of them were going home for the weekend.

I would like to thank all those involved, particularly Dave Lang, Nigel Bird and Mike Latham for all their work, and Phill Niles for doing a great job in catering the event. I would also like to welcome our new members, Phil and Jerry and hope they enjoyed their first day with us.

We are looking at other venues in Devon so that we can provide events in all areas of the county and cut down on the amount of travel that has to be done. We also intend to hold a fly-fishing competition amongst ourselves in October with a view to raising some funds and having a social day out. Any volunteers to join in with our aim of providing an enjoyable day out for our guests are welcome.