£1500 was donated by Lodges/Chapters on behalf of Exmouth Freemasons 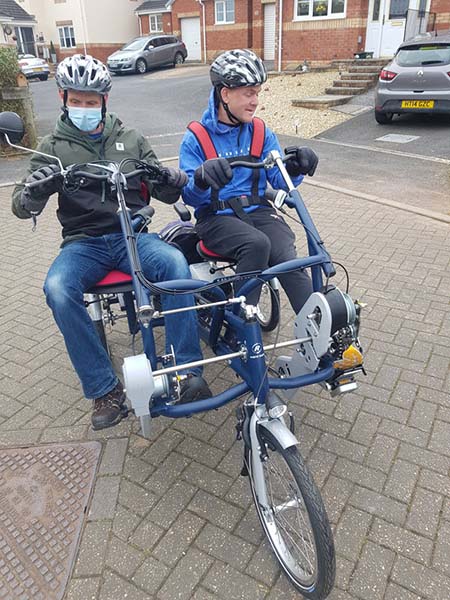 Exmouth Freemasons recently came to the aid of a young man, Ruairi Corr, who suffers from a genetic illness. The illness, Adrenoleukodystrophy, has left Ruairi blind and hearing impaired, with complex medical needs. He has not lost his love of life though and used to ride a tandem bike with his carers but has developed epilepsy and it was not safe for him to continue riding a traditional tandem.

To continue this valuable form of exercise with his carers, he needed to have a side by side tandem with a 5 point harness to prevent injury. Ruairi set about raising the over £9000 for the new tandem by taking on virtual challenges but he was struggling to raise the final £1900 and this is when mum, Deidre, contacted Exmouth Freemasons. Within a few days, £1500 was donated by Lodges/Chapters on behalf of Exmouth Freemasons and W. Bro Peter O’Connor of Rolle/PMPT Lodges and Bro. David Bassett of Sun Lodge visited Ruairi and his family at their home and presented the donation to him.

The photos show Ruairi and his carer on the new side by side tandem and he has been seen out on riding it in Exmouth.